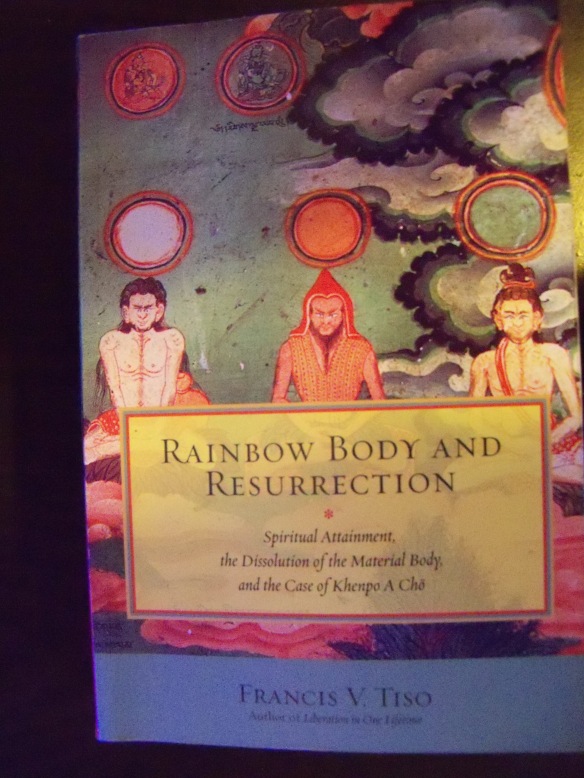 Father Francis Tiso of Italy has been a long time scholar and practitioner of eastern non dual spiritual traditions, and this book follows other works exploring in depth the figures and practices coming out of Tibetan Buddhism.

Another serving Catholic, also well known for mysticism and long time intimacy with eastern traditions, gave Father Tiso a lead regarding reports of paranormal signs surrounding a Tibetan master’s death and aftermath in 1998.  That fellow Catholic is the now 90 year old Brother David Stendl-Rast, a monk in the Benedictine order and someone seen by Father Tiso as an important mentor.

The event involving the post death signs of Khenpo A Cho is rarely reported in our contemporary times, or even in past times.  That is because it is reportedly the fruition of a super charged spiritual practice that deepens an already realized enlightened condition to its full quantum potential, the dissolution of the solidity in perception and apparently, after the body dies, the literal dissolution of the body accompanied by displays of rainbow lights in the immediate environment of the corpse.  After 7 days, left untouched by others in a locked room, the body of Khenpo A Cho was completely gone.  Sometimes, in these cases, some hair and nails are all that remain, but not reportedly so here.

Two years after this event (2000), Father Tiso with others is in the former eastern Tibetan region of Khams investigating this report (and then India and Nepal), interviewing witnesses, etc.  There is no conclusion arrived at by him, regarding what happened.  But, this case serves as an opening to a closer look at the early and later developments of Dzogchen, which Father Tiso is not only deeply informed as a scholar but also in the deepest sense as someone introduced to its deepest realizations by living masters like Namkhai Norbu (among others):

“…….Over the next few days and weeks, this viewpoint matured into a constant state of awareness that seemed to blend my mind, my perception of things, and the things perceived into a single pure act.  The blending seemed more real than the distinctions among mind, sense data, and the otherness of any object.  I nurtured this awareness with readings from the Avadhuta Gita, a radical non dualist text rooted in the Upanishadic tradition.  I felt my alienation and repugnance softening into a persistent nondual view, abiding in the sense of blending, with ready access to the ‘natural state of contemplation’ about which I had learned from the dzogchen master, Namkhai Norbu Rinpoche….”

Father Tiso then expands the examination beyond Dzogchen and the Tibetan traditions to take a good look at what creative interplay was happening along the silk road trail of Central Asia, and therein finds a healthy interaction with various Buddhists and practitioners of the Syriac Church of the East, a community deeply involved in experiential alignment with mystical realities of light.

And, of course, Father Tiso examines all of this in light of the mystery surrounding the post death events of his own root-guru or primary spiritual master, Jesus Christ.  For example, is it possible that the body of Jesus simply dissolved “into the light” so to speak, in the manner reported in Tibetan rainbow body cases?